Step-by-step tutorial : Use potentiometers with your Gamebuino Meta

The goal is to produce a program looking like this : 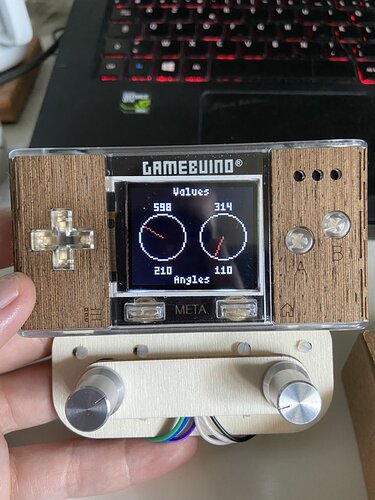 For this we will need :

If you haven’t done it yet, please refer to the following guide to install and configure the Arduino IDE.
Get started (C++ 1/5) : Quick software setup - Gamebuino

If you already have solid knowledge in coding (or just don’t feel like going through this amazing tutorial) you can simply get the commented code from the Mini-code : potentiomètres (subject is in french but comments are in english)

Before coding we need to plug the potentiometers to the console, preferably with the accessory backpack. 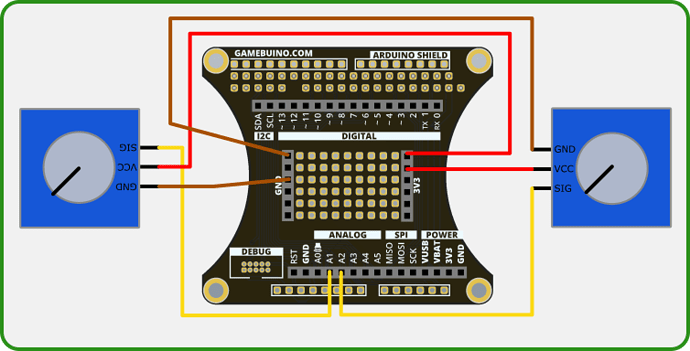 This seems a little empty for now, we’re going to fill it up.

*Before anything else we need to add the following line at the start of our file :

This is called a “library”, it will allow us to use a whole bunch of functions without the need to manually code them. This specific library contains all the Gamebuino functions and will be very useful for what’s coming next.
We need to add two functions to make our program work :

The gb.begin() function initializes the console : without it nothing will work !

The gb.waitForUpdate() function allows for screen content refreshing (drawing things on it), handles sounds, buttons presses, in short everything needed for the console to come to life.

We now have a functionnal program structure, although it does nothing at the moment.

Before laying down some code we need to plug in our potentiometers, preferably with the developper backpack.
Power inputs (VCC) go into 3v3 ports, ground pins (GND) go to, well, ground ports, and signal pins (SIG) go to analog ports A1 for the left potentiometer ans A2 for the right one.

Step 2 : Reading measurements and transforming them

Our potentiometers send analogic values, physical measurements, to our console. We will gather those measurements’ values and transform them into something the machine can understand, in this case a numerical value.
For this we will use the analogRead() function from the standard Arduino library. This function allows the transformation of an analogic (physical) value into a numerical value thanks to the ADC (Analog to Digital Converter) module of the console’s processor.

Those declarations are made at the beginning of our code, between libraries inclusions and the setup() function.

Those variables declared outside a specific function are called “global” variables, they can be used and modified from about any point in our progra. In a small program like this one this is not an issue, but in a larger program with hundreds of lines of code and lots of variables this can be considered a bad habit to use too much global variables. This is because using too much of those can make following what part does what very tedious.

We will now declare a function to assign values to those new variables and transform them.

Indeed, we want this function to be executed repeatedly in each loop of our program.

Now we need to fill up this function se it can do its job reading values thanks to the analogRead() function.

To better represent the action of our potentiometers we will display the values we got at the previous step on the screen to monitor them.

*We declare this function in our scope as follows :

Note that we need the clear() function to avoid frames “piling up” and becoming unreadable.

Our loop() function is new complete, we won’t be adding new elements inside, the modifications will now take place directly withing the read_and_calc() and/or draw_interface() functions.

Now we have to complete our draw_interface function to display our raw values and our angle values.

It may seem heavy but it is simply the formating of text needed by the function. Le text between quotes is displayed as is, the %d are values to be fetched from the variables specified after quotes, separated by commas, and the \n are newlines.
(The printf function is a standard C function, if you want a good headache go read its full documentation or its source code).

By launching the compilation of your code and uploading it to your console you should see the following appear on your screen : 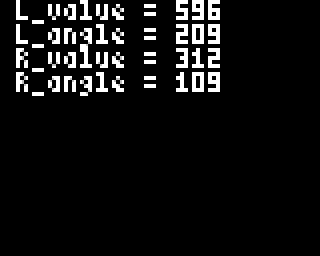 That’s a start, but it’s quite bland and frankly a bit ugly. So we will now improve it.

In this part we will see how to transform the values we got earlier into two identical visual representations, as seen on the picture at the beginning of this tutorial.

For this we will use some mathematical formulas, namely sin() and cos(). (in case you studied math in high school you should be ok, otherwise brace yourselves).

But before that we will use defines to establish the dimensions and positions of two circles that will act as the basis of our visuals.

This way we determine a radius (CIRCLE_R) of 15 units, a horizontal position (CIRCLE_X) at 1/4th of the screen for the left circle and 3/4th for the right one, the two circles will be vertically centered (CIRCLE_Y).

We can now do two additional things :

Beware ! Here come the calculations using sin() and cos() to add “clock hands” within our circles that will move according to the position of our potentiometers.

For that we will declare two pairs of global variables that we will use to place points on the perimeter of each circle, so we can then trace lines between the center of the circles and the exterior points to represent our “hands”.

We now have a pair of variables for each point, we will use them as X and Y coordinates to determine their positions in space.

Now we need to assign values to those variables so they make themselves useful.
We need to add the “math.h” library to our program.

It gives us access to a predetermined PI value within the library as well as the sin() and cos() functions. It is possible to not include this math.h library since sin() and cos() are supposed to be included in the Arduino library by default along a macro that gives a rounded PI value, we iinclude it nonetheless for the principle of it.

This determines dynamically the position of the points on the perimeter of our circles depending on the reading values we transformed into angles.

Once those coordinates are determined we can use them to trace our “hands” within our circles.

We add the setColor(RED) function so our “hands” are red, it looks nicer. If you’re allergic to red you can pick another color such as GREEN or BLUE for instance, beware of fashion faux-pas though.

Launch the compilation and uploading of your code and you should get the following result :

Just one more step and we will have the exact same program as on the picture shown at the start.

We will cut the text we had previously into several parts so the different elementss can be dispatched all over the screen.
For this we will mainly use the setCursor function that allows us to freely move the text cursor around the screen with X and Y coordinates. Along with the printf() function it gives up the possibility to put text exactly where we want it without the need to format a really long and convoluted string of text made mainly of blankspaces and newlines.

Everything takes place in our draw_interface() function of course.

You survived through this new tutorial, congrats ! You now have a nice little program you made with your own hands to test you potentiometers. Your turn now.