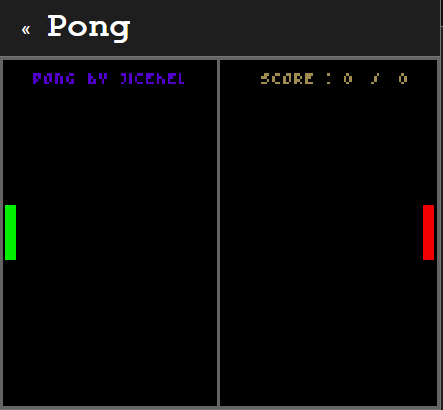 This pong is just a test to use the IDE of FManga You can use it here: https://micojs.github.io/

Atm the IDE is used for Gamebuino META, Pokitto and ESPBoy but you can have all informations here: Home · micojs/micojs.github.io Wiki · GitHub

The IDE continue to evolve. This game is just a little test of all things you can do with.

Thanks atm, it’s just a basic Pong code to test but i’ll add some things to test more options and verify that it’s works fine on META and to show example of code for the ones who would make programs in a java like langage. IDE is very cool already and it’s just at the beginning. I will compile for ESPBoy after to verify compatibility and probably adjust a few to fit in the screen. It’s very easy to use HD with this IDE

This project is fun !

One and only one code for few game consoles, if I understand ?

Do you know if the next step it’s the block programming (like Scratch) ?

Yes Chris, you understand well and some more consoles will follow on the road map of FManga…

I don’t think that block programming like Scratch will be done by someone else. I know Roman was thinking about it on ESPBoy. On Arduboy Kevin was ready to paid someone to do it but i don’t have see something like that for different consoles atm.

Using micojs is fun. You can download your bin atm for Meta but FManga is working to do like on ESPBoy and be able to upload directly via USB (I don’t talk about Pokitto even it’s a great console, because i don’t have and can’t test)

If I had time, I would have liked to look at how to implement block programming on these consoles. But I have other personal projects at the moment…

But it would be a great asset to have block programming! In addition of course to a real course to understand the code in order to know how to make a game by yourself

Sure. I hope that someone will do it one day.